The member representing Kiru/Bebeji constituency in the Federal House of Representatives, Abdulmumin Jibrin Kofa has announced that his readiness to leave the House.

Mr Kofa twitted that “Very soon I may be in the labour market. I will be a free agent.  My CV is ready. Any offer?

Mr Kofa made the statement after re-twitting a statement by the House Speaker, Femi Gbajabiamila explaining why Kofa was not appointed chairman of any standing committee.

“Let me clarify that Hon. Abdulmumin Jibrin was not excluded from the leadership composition. He was involved in the composition process and declined accepting any committee leadership.” The Speaker stated.

“Hon. Jibrin had, repeatedly, made clear his intention to leave the House. My persuasions and that of some other leaders convinced him, reluctantly, to stay a bit longer.” He added.

“He wants a fresh challenge and his preference will be to return to the university and pursue his professorial ambition, face his private business or serve in the executive arm of the public service.” He said.

Kano today recalls that Mr Kofa of the ruling All People’s Congress (APC) won the 2019 election by narrowly defeating Ali Datti Yako of the People’s Democratic Party (PDP) with a margin of 685 votes.

However, the Returning Officer, Bello Idris Tijjani, a professor of Physics at Bayero University Kano had to announce the result in the state capital due to violence at the constituency.

The PDP rejected the result alleging that six polling units won by the party were cancelled.

According to the PDP there were   over 700 registered voters in the cancelled units.

In his reaction after winning the election, Mr. Kofa said it was the most difficult campaign of his political career and he would not contest for the seat again.

The Elections Petitions Tribunal has closed hearing of the cases instituted by PDP against his victory on July 22, 2019.

The tribunal is, however, yet to deliver its judgment.

KANO FOCUS reports that the award was presented to her on Monday October 25, 2021  by the Faculty of Humanities at their 2nd International Conference themed “Nigeria in the 21st Century: Culture, State and Society.

In his remarks, the Vice Chancellor of the University, Muktar Atiku Kurawa said that the award was in recognition of her meritorious contributions to humanitarian services and commitment to the advancement of the cause of the less privileged.

“The Minister of Humanitarian Affairs, Disaster Management and Social Development Sadiya Umar Farouq has been in the forefront of humanitarian services in this country, including resettling people in distress due to insecurity, Internally Displaced Persons, the vulnerable as well as other Persons Of Concern. We appreciate her contributions and attention to the less privileged in the society”.

In her response, the Minister Sadiya Umar Farouq thanked the Governing Council of the university for finding her worthy of an award. 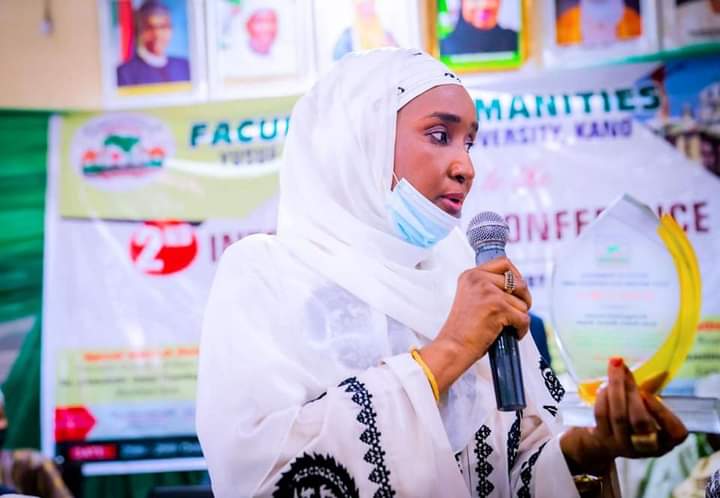 The Minister expressed gratitude adding that the award will nudge her to further serve humanity through the Federal Ministry of Humanitarian Affairs, Disaster Management and Social Development.

“I am honoured and humbled to be here today, alongside other eminent and deserving personalities, to be conferred with a prestigious award by the Faculty of Humanities and the Governing Council of Yusuf Maitama Sule University.

“It also gives me the opportunity to thank everyone that has worked steadfastly to create an enabling environment for us to support Persons of Concern.

“It must be noted that all interventions, policies and frameworks being fashioned by the Ministry of Humanitarian Affairs, Disaster Management and Social Development have been created to support and improve the lives of Nigerians. Let me use this opportunity to urge Nigerians, especially the youths, to key into the NSIPs as they are strategically targeted to ensure that we invest in the vulnerable populations to reduce those at risk of poverty.

“I sincerely thank you for deeming me worthy of conferring on me, this prestigious award”.

Kano State government has demanded a one per cent special status in the Federal revenue  allocation formula.

KANO FOCUS reports that the demand was made in a memorandum presented by the Secretary to the  State Government and head of Kano state delegation, Alhaji Usman Alhaji, (Wazirin Gaya), during the North West Zonal Public Hearing on the review of the current vertical revenue allocation formula organized by the Revenue Mobilization Allocation and Fiscal Commission in Kaduna on Monday.

Alhaji Alhaji noted that the demand is genuine, justifiable and in no way controversial considering the enormous responsibilities the state is currently shouldering due to high influx of people displaced or affected by insecurity in neighboring states including Katsina, Zamfara, Kebbi, Sokoto and others.

He also highlighted the status of the state as the most populous in the country, its cosmopolitan and heterogeneous nature as “mini Nigeria”, as well as being the commercial hub for the north that attracts and accommodates people from all parts of the country and beyond, as other reasons for the demand.

The Secretary to the State Government therefore urged the federal government to positively consider the special status demand so as to support the development of Kano particularly in the areas of agriculture, trade and commerce and manufacturing as “it will translate into rapid development for the country generally.

“Our reasons are for the development of Nigeria as a whole”. He added.

The SSG further noted that the current revenue sharing formula is skewed largely in favour of the federal government to the detriment of states and local governments as the federating units, which he described as uneven, unfair and unjust.

He noted that the decision of the Revenue Mobilization Allocation and Fiscal Commission (RMAFC) to review the current revenue sharing formula, in line with its statutory constitutional responsibilities,  is commendable as it is long overdue in view of the changing political, economic, social and ecological realities in the country.

Alhaji Usman Alhaji further noted that despite taking the lion’s share, the federal government could not effectively and adequately discharge most of its responsibilities in states, like ensuring security and provision of healthcare services which, he said, were left for the states to take care of.

” The insecurity and violence in the North can be link to the uneven distribution of the national wealth. …Some have too little while others have too much to spend. As federating units, no one should be left in dare need “, he added.

While noting that states spend more than the federal government on healthcare and other services in addition to huge expenditure for the police and DSS, he suggested that states should have larger share in the revenue allocation formula.

The SSG therefore, on behalf of Kano State Government, proposed a new sharing formula of 41 percent for Federal Government, 34 percent for states and 24 percent for local governments while the 13 percent derivation should be maintained.

Other states that presented memoranda at the occasion include Jigawa, Kaduna, Kebbi, Sokoto and Zamfara.

Governor of Kano state, Abdullahi Umar Ganduje has offered a teaching job to a blind person, Dahuru Abdulhamid Idris, who has been teaching voluntarily.

“You are a role model, whose visual impairment does not stand as a stumbling block for your development.

“You are taking the right step in your life. The Kano state government is giving you automatic employment of teaching. And I have directed the state Commissioner of Education to post you to Tudun Maliki Special Education School.” He said

It will be recalled that Daily Trust Newspaper did a comprehensive report of the Blind person and his Contributions to his Community despite his disability.

The report attracted a lot of comments and Sympathy from different people.