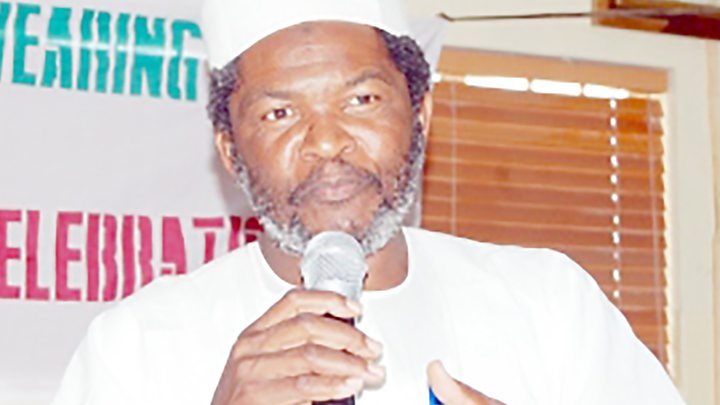 Mr Khalil disclosed this in an exclusive interview with KANO FOCUS on the sidelines of a conference organized by Bayero University Kano to commemorate Narambada’s legacy.

“In Alhaji Dandurgu’s song, Narambada said he didn’t want money but to be sponsored to perform the Hajj.

“When I learned that his wish was not fulfilled, I sponsored a pious man to perform the Hajj about 20 years ago with the hope that Allah records the reward in Narambada’s account.” Mr Khalil said.

The Islamic scholar explained that he loves Narambada for his outstanding qualities such as his deep knowledge, brilliance, good conduct, respect for his teachers, devotion to his mother and insistence that even his troupe members must be of good conduct.

“For example, in Sarkin Gobir’s song, Narambada said he has stopped lying even in his songs as he has passed 60 and was hoping to reach 70.” Mr. Khalil said.

Singing and Music in Islam

The Islamic scholar said there is nothing wrong in listening to music as singing is not a sin in Islam.

“Singing is like speaking. What you say determines whether it is sinful or not.” He explained.

He however said that music is contentious among Islamic scholars.

“Some scholars permit music without any reservations while some consider it absolutely sinful.

“However the most authentic position is that music is permissible but the context of its performance may be sinful.

“It is therefore sinful to perform music at a casino or brothel for example.” He said.

Mr. Khalil added that people who do not listen to music are losing out on the wisdom that is inherent in songs.

“Those that listen to music and songs will be wiser than those that do not.

“And those that do not listen to music have lost 50% of what they need to calm their minds and shape their lives.”

Ibrahim Narambada was a Hausa traditional musician who was born in 1890 and died in 1963.

His father Mai Dangwale was from Filinge area of Niger Republic but settled at Tubali village in modern day Zamfara state where Narambada was born.

Narambada dominated the Hausa music scene during his life and left about 50 documented songs after his death.

The Minister of Communications and Digital Economy, Isa Ali Ibrahim Pantami has on Monday flagged off the training on e-governance and digital transformation for the members of the Kano State Executive Council.

Kano Focus reports that the training which is the first of it’s kind, was aimed at equipping the leadership of the state with the requisite skills for effective governance in line with global best practices.

Speaking at the event, the Minister noted that “e-governance is key to the success of any economy at all levels as it enhances transparency, cost effectiveness and accountability while ensuring the effective delivery of government digital services to the people. Kano is strategic in terms of population and commerce and the timing is apt.

“The programme aims at tutoring the top state government officials on the application of modern technology to improve performances at all levels and also deliver services and programs more efficiently, transparently, and cost-effectively.”

Pantami disclosed that the training was at the behest of the state governor Abdullahi Umar Ganduje who had initiated talks on possible collaborations and partnerships with the Federal Ministry of Communications and Digital Economy during a courtesy visit earlier this year.

While commending the state governor for the plan to deploy fibre optics across the state within the next two years, the minister called on other state governors to emulate Ganduje and embrace the digital transformation training.

“We are open to partnering with any state that is willing to take advantage of this laudable initiative.”

““E-governance is a necessity for the success of every government”, Pantami said, adding that, “according to the World Bank diagnostic report of 2019, it was projected that by 2025, e-commerce activities in Nigeria will reach up to USD 75 Billion within a year”.

“COVID 19 has exposed the need for digitization, which is now a necessity”, Pantami stated.

The Minister urged the council members to take full advantage of the training, stressing that e-governance is key to the success of any economy at all levels.

Pantami also called on the Kano state government to adopt other initiatives and strategies of the Federal Government such as the Nigeria Interoperability Framework, and the Nigeria e-government Enterprise Framework and make them the mirror for the implementation of e-governance in the state.

He further advised the state government to study other National policies of the Federal Government and key into them so that the IT investment plan of the state will be in alignment with that of the federal government.

Pantami announced the donation of over 100 digital devices to the state by the Federal Government and called on the beneficiaries to make good use of them.

On his part, governor Abdullahi Umar Ganduje appreciated Pantami for matching words with action following his visit to the Communications and Digital Economy Complex in Abuja where he initiated talks on the possible collaborations and partnerships with the ministrynistry to foster ICT development in Kano state.

The Governor thanked the Ministry for the provision of digital intervention projects in the state such as a digital training centre which is ongoing and also the consideration to use Kano as the pilot state for the Government Digital Transformation training.

Ganduje expressed gratitude for the training of over 1000 youths from the state on digital skills and also the support rendered to the state to come up with a State ICT policy which he described as the blueprint guiding the state over the years.

He further solicited support from the ministry to update the policy to reflect current realities.

The governor explained how community policing strategy goes deeply into the fabric of Kano society, as a political entity.

“Community participation, apart from community policing is necessary for us to achieve a desirable situation from all ramifications. As such, we are also inviting corporate social responsibility in the management of security situation in Kano state.”

Part of the factors that played an important role in the security situation in the state, he acknowledged and appreciated that, “Our security agencies have succeeded in building full synergy among themselves. And we have extended coordination in order to get security information and action in Kano state.

“We have to thank the Police, the Department for State Security (DSS), the Air Force, the Army, the Civil Defence (NSCDC), Immigration, Customs and Excise, Correctional Homes, traditional institutions, National Agency for the for the Prohibition of Trafficking in Person (NAPTIP), the Vigilante Groups, representatives of various communities, we have to thank them all. They are all contributing to the security situation in Kano state.”

“We can see the effort of our security agencies that are working round the clock in order to keep Nigeria safe. In Kano state we are also conscious of the security of our state. Therefore we developed various strategies in order to secure Kano state.”

“First of all we examined the issue of metropolitan, Kano being a metropolitan city and a mega city, we have taken necessary steps in order to ensure the security of our own mega city.”

“We built what we call Security Dormitories on the major entrance of metropolitan Kano. That each of the dormitories houses 600 policemen. And also we have developed CCTV programme.

“Which is working very well. While the control room is with our security agencies. We have other technology employed in order to check security issues.”

In his remarks, the Emir of Rano, Kabiru Inuwa Muhammad, commended the effort being put by governor Ganduje in securing all parts of the state, with the Divine help from Almighty Allah.

He said, “Today is a historic day that we cannot forget. All our people are happy with this special event taking place in our Emirate, Rano Emirate. We are always ready to cooperate with your policies and programmes Your Excellency Sir. Especially this issue of community policing.”