The Kano state Hisbah Board has arrested a woman, Hauwa Ali, a resident of Mariri quarters in Kumbotso local government for allegedly marrying a second man while she was still married to her first husband who had fallen ill.

It was gathered that Ms Hauwa, 30, had produced seven children to the two men–six for Mr Ibrahim and one for Mr Abdussalam.

The woman was said to have lived with Mr Ibrahim for 15 years before he took ill and relocated to Bauchi, where he had stayed for two years.

Mr Ibrahim told KANO FOCUS that he had traveled to his hometown of Bauchi state to seek medical treatment after he took ill, only to return and find another man occupying his house.

‘I almost beat the impostor to coma’

“I relocated to my home town in Bauchi when I was critically ill to seek for medical treatment, and I left my wife along with my six children to cater them.

“But to my surprise when I came back home I just found another man in my house claiming my wife as his,”  Mr Ibrahim explained.

“I was so furious with the impostor that I almost picked up a stick to beat him up but I changed my mind and decided to report him to the authorities,” he added.

Mr Ibrahim said he wants the Hisbah officials to return his wife to him and take action against his rival.

However, reacting to the claim, Ms Hauwa’s second hubby Mr Abdussalam said he married her with her consent after paying N20,000 dowry to her.

He said he never knew that Ms Hauwa was still married to Mr Ibrahim, noting that she told him she was divorced and that was why he agreed to marry her.

“ I dated Hauwa since she was young but God destined that she would marry Mr Ibrahim. But when she called me and told me she was divorced, I asked her to marry me,” he recalled.

“I gave her N20, 000 as her dowry and left for a business trip outside the state.
“She later called me on phone and said her parents had agreed to our marriage which we conducted soon after.

“Today I have an 11-month child with her. This man then appeared from nowhere and claimed that she is his wife, ” Mr Abdussalam explained.

On her part, Ms Hauwa said she married her second hubby Mr Abdussalam after Mr Ibrahim divorced her.

“Before my first husband fell ill, I asked him to divorce me, and without hesitation he divorced me.

“I was living in his house after the divorce to cater for the children because I didn’t know where to go with them, and he left for Bauchi claiming he was ill.

“After he (Mr Ibrahim) divorced me, he promised that he will never take me back as his wife, hence I had the freedom to marry another man,” she said.

But Mr Ibrahim dismissed Ms Hauwa’s claim, insisting that he never divorced her.

Speaking on the controversy,  Director-General of Hisbah, Dr Aliyu Musa said the case would be taken to court.

He said the board has already forwarded the necessary documents on the case to the court.

Editor’s note: The initial headline of this story indicated that Ms Hauwa had six children. But a careful review shows that she actually has seven children. The error is regretted. 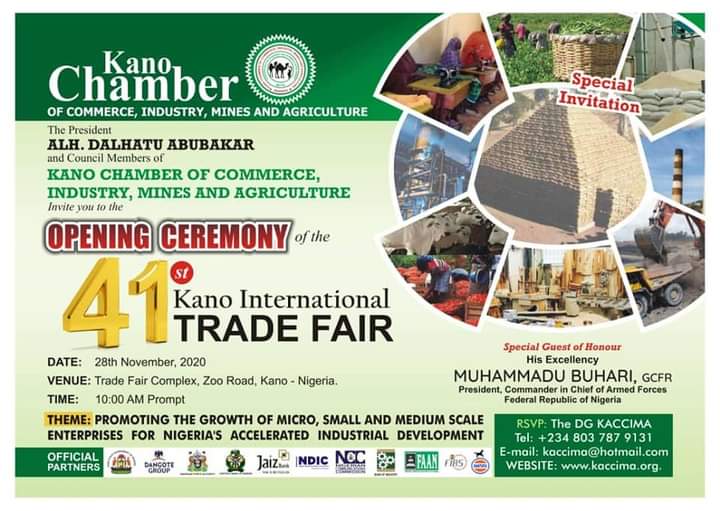 The 2020 Kano International Trade Fair organized by Kano Chamber of Commerce, Mines, Industry and Agriculture (KACCIMA) has kicked off on Saturday at the Trade Fair Complex,  Zoo road, Kano.

speaking at the opening ceremony, Kano State governor Abdullahi Umar Ganduje said his administration is committed towards making Kano the most commercial viable centre among the 36 states of the federation.

Represented by his Deputy Nasiru Yusuf Gawuna, the governor explained that the state has embarked on several projects to attract more investors from within and outside the country.

“Our administration as part of its dire need to change the outlook of markets and also to enable them compete favourably with international markets came up with the idea of ‘Yan Tebura Mall at Kantin Kwari Market which is one of its kind in the whole Northern Nigeria.

He pointed out that despite security challenges bedevilling the Northern part of the country, his administration is not relenting its commitment to make Kano one of the safest destinations.

Mr Ganduje commended KACCIMA for organising the Trade Fair, describing the feat as indication of shrewdness and commitment of members to make Kano a role model in commerce and industry.

In his remarks, the Minister Of Trade Otunba Adeniyi Adebayo represented by Tukur Muhammad said the theme of this year’s fair ‘Promoting the growth of micro,small and medium scale enterprises for Nigeria’s accelerated industrial development’ is in tandem with Federal Government’s commitment to its mandate of boosting the growth of micro, small and medium enterprises to ensure that their products meet the acceptable global standards.

He applauded the effort of the State Government and KACCIMA for creating a conducive environment for business activities in Kano despite the economic  challenges posed by COVID-19 pandemic. 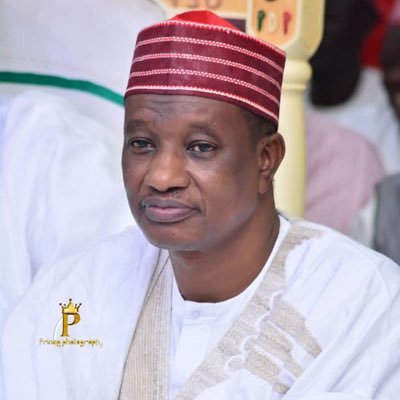 Mr Abdussalam was speaking on Friday at a Press Conference on failure of Kano state government to constitute panel of inquiry to investigate police brutality and alleged destruction of historical monuments in the state.

He recalled that, amidst #EndSARS protest, president Muhammad Buhari has directed all governors to set up panel of inquiry to investigate police brutality in their respective states, but none was established in Kano.

According to him 31 states of the federation have since constituted such panel of inquiry in compliance with presidential directive.

“You may wish to recall that #EndSARS aftermath necessitated federal government to direct all state governments to constitute panel of inquiry to investigate police brutality and ascertain the level of damages to the victims.

“But to our dismay and unfortunately as I am speaking to you right now, no such panel was established by Ganduje administration in Kano state. While 31 states have already kick started the investigation of police brutality.

” This has led us to raise question whether there is any police brutality in Kano, or any reported killing by the police as it happened in Sharada and other places. It appears the APC led government is feeling that Kano people does not deserved such attention,” Mr Abdussalam said.

He said instead of consolidating on Kwankwaso’s policy of establishment of zoological garden in each of the senatorial district, the governor is closing the first Zoo in the state.

” It is also very sad to note that policies initiated by immediate past administration to establish one zoological  garden per senatorial zone is now being reversed by Ganduje administration.

“A recent announcement by the governor through one of his commissioners that the only zoological garden situated in Kano central would be moved to another place.

” Instead of completing the one initiated by Kwankwaso administration at Bagauda, and establishing another one in Kano North, the governor is to say the least going in anti-clockwise direction.”

“In view of this we are calling the attention of government and other well meaning citizens of the state and individual involved in grabbing public land to desist from this merciless act.

” All these grabs of the public land are only for the benefit of few individuals, and more like a family affair.

“In the event however, that Ganduje continue to destroy these historical monument and strategic public properties, we will remain with no option, than to diligently pursue lawful means and engaging public protest in order to solve this disaster.

The politician described as setback auctioning public properties to individuals in Kano state.

“You may recall that Kano state government has been selling public properties such as Gidan Zoo, Daula Hotel, Triumph Publishing Company, Eid ground, Kofar Mata, Panshekara Modern Abattoir, some part of Fagge Juma’at Mosque, Hajj Camp and Shahuci Motor Park to individuals for personal gains through non-transparent and unconstitutional means that are hitherto being used for the benefit of all.

“The action if this inept, clueless and incompetent government, whose desire is only to milk public fund is a clear sign of setback to Kano state in particular and the nation at large,” Mr Abdussalam said.

The Kano Zonal Office of National Human Rights Commission says it has received over 1000 complains of Gender Based Violence between January to November this year.

Kano Focus reports that the Kano Zonal Coordinator of the Commission Shehu Abdullahi disclosed this when he paid a courtesy visit to Kano State Chief Judge Nura Sagir in his office.

He said the aim of the visit was to sought for the Chief Judge collaboration on the 16 days of activism embarked by the commission to end the gender based violence in Kano and Nigeria at large.

Mr Shehu pointed out that the number of gender based violence in Kano risen to over 1000 despite lockdown period which restricted public from movement.

He explained that 80 percent of the cases emanated from neglect of parental responsibility, paternity denial and other harmful act against women.

He called on the Justice Sector to ensure accelerated trial is adopt in gender based violence cases with a view to curtailed the menace.

He also urged Justice Sector to ensure the full implementation of Administration of Criminal Justice Law in punishing the culprit of Gender Based Violence.

In his response, the chief Judge of Kano state Nura Sagir said gender based violence is a global pandemic despite daily preaching and sensitisation by religious leaders and civil society organizations.

The Kano state Chief Judge stressed that gender based violence in on the increase considering the number of cases adjudicating in court.

Also in their separate remarks Justices of Kano state High Court Maryam Sabo and Zuwaira Yusuf said to overcome the menace relevant stakeholders need to put their hands on deck with the view to curtailed the violence.

Mrs called on ministry of Justice to avoid delay in the provision of legal advice.

She stated that legal advice shall be issued within 40 days as provided by Administration of Criminal Justice Act of Kano State.

Kano Focus reports that the 16 days Activism is reserved on every November 25 to create awareness and advocacy through series of activities with the aimed of bringing to the end of gender based violence.

Kano gets one-day commissioner of education