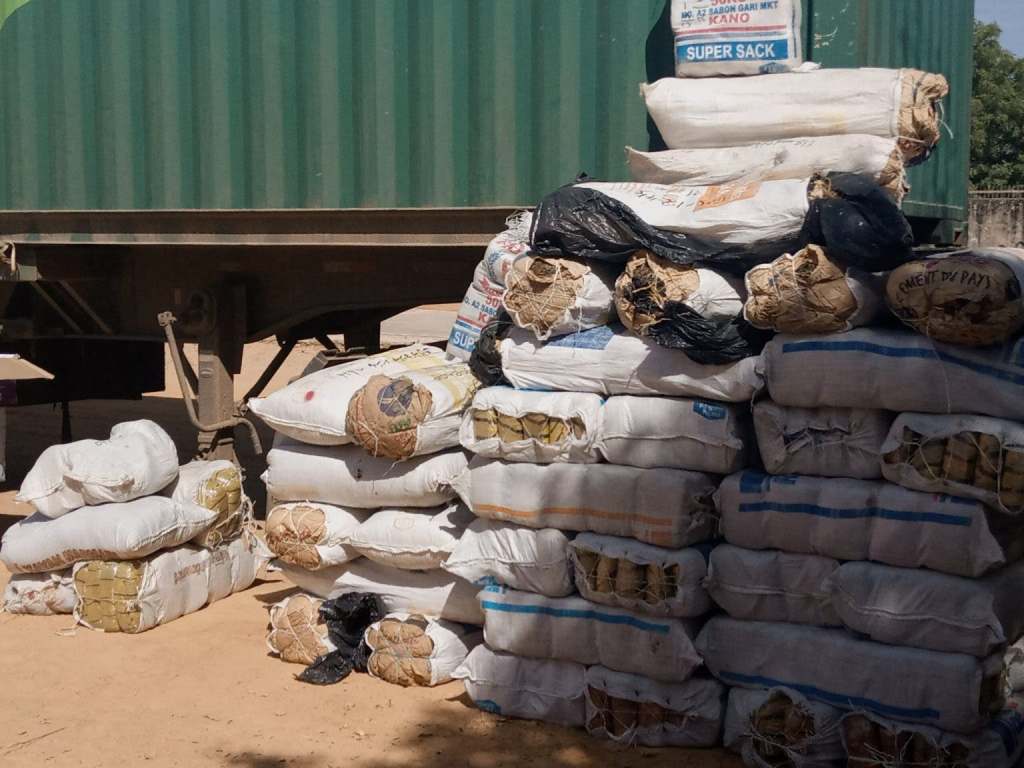 The National Drugs Law Enforcement Agency (NDLEA) in Kano State said it has rehabilitated four clients out of126 drug users undergoing counselling at its facilities.

Kano Focus reports that the NDLEA Commander in the State, Ibrahim Abdul revealed this while briefing journalists on Thursday in Kano on their activities in October under review.

The commander added that the command has also arrested one Madam Caroline with 576 kilograms of Cannabis Sativa.

According to Abdul, the woman was arrested along Zaria-Kano road while conveying the exhibit from Lagos in a container truck.

“This woman, a notorious drug dealer was convicted twice, and now she is going to be a third offender by the grace of God, and finally met her waterloo.

“We also arrested one Bako, with 201 kilograms of Cannabis Sativa, also along Zaria-Kano road while heading to Kano city in a Honda Accord.

“And also, a gate man in Bichi Local Government Area was arrested with 87 kilograms of the same exhibit.

“What we normally do is that, we follow the suspects from far away, until when they have entered our territory then we arrest them”, he said.

Abdul further explained that in the month of October, the command has intercepted 1,340.6 kilograms of exhibits.

Some of the exhibits he said were intercepted including 1,137.6 Cannabis Sativa and 203.1 Psychotropic substance.

He said that further investigation is ongoing for the possible prosecution of the suspects.

The commander said that most of their seizures were recorded during a special operations by the command’s Joint Task Force.

“In the month of October under review, we secured the conviction of 15 drug traffickers, six regular clients were admitted.

While answering questions, Madam Caroline admitted that she was convicted twice. 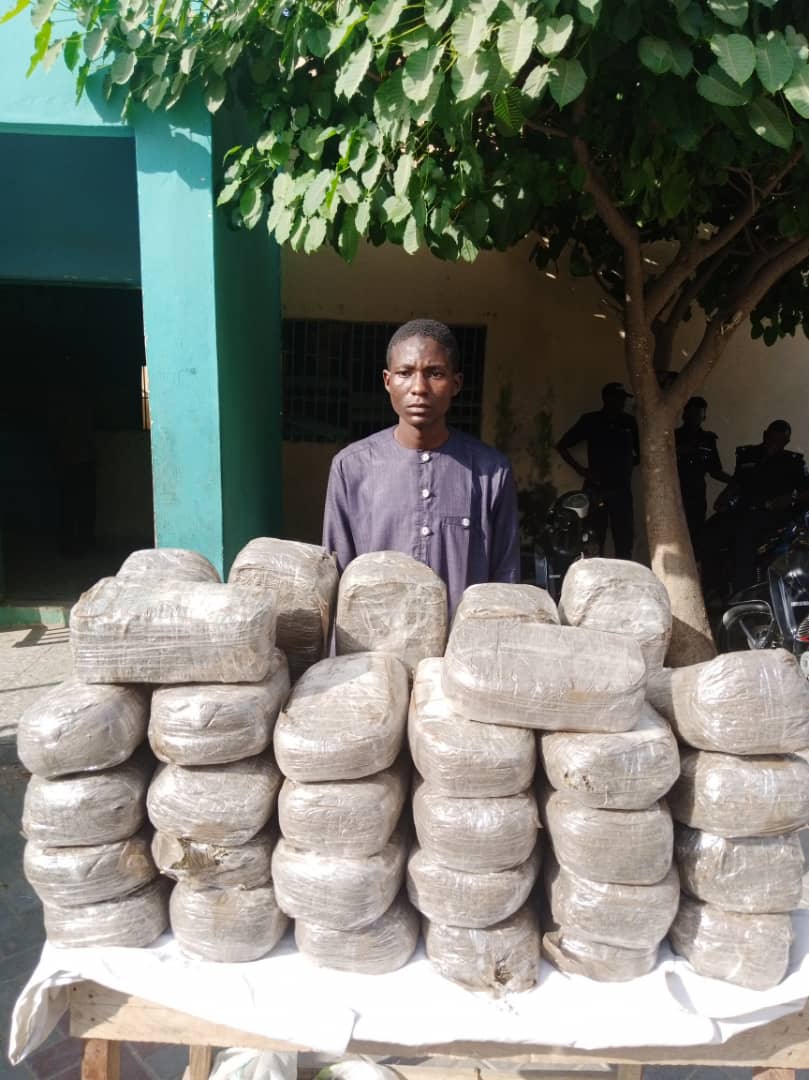 Police in Kano has arrested a 21 year old Kabiru Mahmud with 49 parcels of Indian hemp popularly known as ‘wiwi’.

Kano Focus reports that Mr Mahmud was arrested at Danbure while taking the substance from his family home at Gadonkaya quarters to a hiding place at Danbare, an outskirt of Kano metropolis.

The police spokesperson in Kano Abdullahi Kiyawa said the command has received an intelligent report of a young man with some sacks believed to be Indian hemp.

According to him police has also arrested Mr Mahmud’s uncle and his mother who directed the suspect to move the substance from her matrimonial home at Gadonkaya quarters to Danbare.

The suspect, Mr Mahmud told police that on the fateful day, his mother called and informed him that police has arrested his father with Indian hemp, and he should come back and get rid of some exhibits kept in the home in anticipation of police arrival for investigation.

Mr Mahmud who admitted he is taking the Indian helms, told police that his father was in Indian hemp business for about twenty years.

“I called my friend at Danbare that I will bring the substance to his residence. My uncle called a tricycle rider, we uploaded the substance and moved it to Danbare. Upon our arrival, the operatives of Anti Daba arrested all of us,” Mr Mahmud told police.

Mr Kiyawa added that the Commissioner of Police has directed the case to be transfer to state CID for further investigation, and find out the source of the substance and how it was smuggled to Kano. 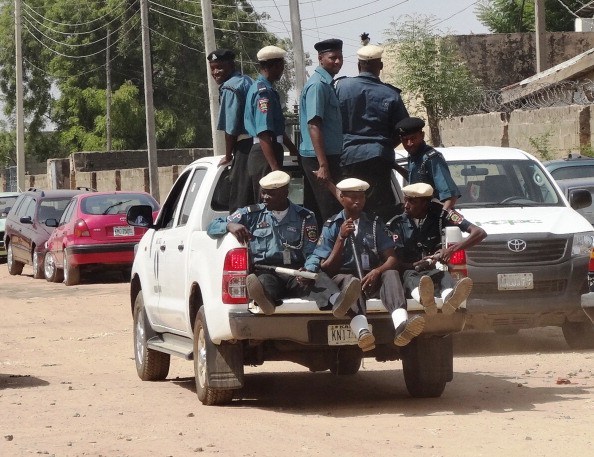 Kano Focus gathered that Basiru’s accomplice, one Jamilu has flee as he is now at large.

An official of the Hisbah who spoke under condition of anonymity, said Basiru and Jamilu occupied an apartment at Rumawa area of the state where they carry out their illicit conduct.

He said community members in Rumawa raised alarm about the activities of Basiru and his accomplice leading to his (Basiru’s) arrest and a teenage female victim (name withheld), whose relative were earlier searching for her whereabout.

A guardian of the victim, Usman Ahmad said his daughter suddenly disappear and was later found in the custody of the constabulary.

“They (Basiru and Jamilu) built the house in Rumawa area and use it for sexual exploitation of underage girls and other victims.

“My daughter always go missing and spent days before she returned back home. This time around she went missing for two days and was later found in the apartment of the constabulary.

“Basiru was arrested and the other, Jamilu whom is the owner of the house and now at large,” Ahmad however said.

Meanwhile, it was however gathered that the matter has been transferred to police divisional office in the neighborhood for further investigation.

Kano Focus reports that the court found the convict guilty of seven count charges bordering around criminal breach of trust.

The court however has struck out twenty one count charge as the EFCC counsels failed to proved the case beyond a reasonable doubt.

The Economic and Financial Crimes Commission, EFCC has on February 26, 2015 arraigned the trio of Rabiu Hassan Dawaki, Abdullahi Umar Rano  and Samuel Obende before Justice Dije Aboki of Kano State High Court on 28-count charge bordering on conspiracy, criminal breach of trust and falsification of accounts to the tune of N561,000,000.00.

Two of the accused persons Abdullahi Umar Rano  and Samuel Obende died in the course of litigation.

Counsel to EFCC Aisha T Habib described the judgement as partial success, as they filed 28 count charge against the convict and two others.

She told Kano Focus “We actually charged him along two others with falsification, fraudulent acquisition of properties and using the fund they siphoned  from the bank.”

Ma’aruf Yakasai, counsel to convict, told Kano Focus that he will discuss with his client and determine the option of appeal.